Between Huntingdon and Peterborough, in the west of Cambridgeshire lies the small village of Conington. With its beautiful All Saints Church, first mentioned in Domesday Book and rebuilt in the early 16th Century, and remarkably beautiful cottages and homes perched on the edge of the fens, one can hardly imagine that 70 years ago this was the home of four squadrons of B-17 Flying Fortresses, roaring into the air almost daily for targets in Germany and Occupied Europe. 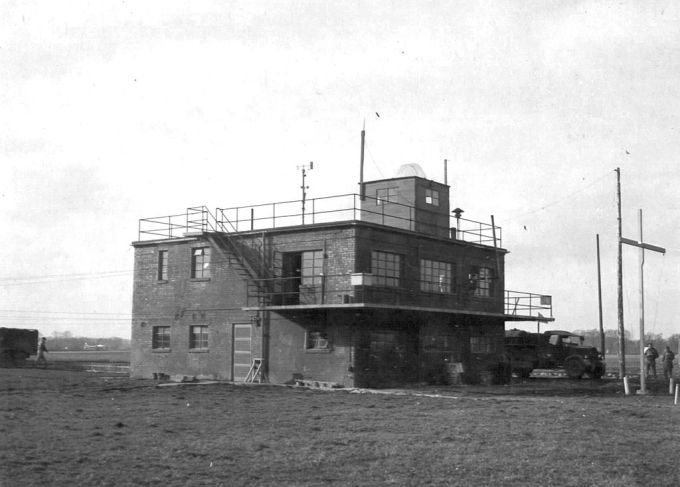 The Control Tower, now demolished, of RAF Glatton, taken on 31 March 1945. In the distance, to the left of the tower, a B-17 is visible on the taxiway. US Air Force Photograph, in the public domain.

In the Second World War, Conington was located next to Royal Air Force Station Glatton, which was constructed to Class “A” standards by engineers to support heavy bombers in 1943 with the intent of being used by the U.S. Army Air Forces in the strategic bombing campaing. The 457th Bombardment Group (Heavy) arrived on 21 January 1944, consisting of the 748th, 749th, 750th and 751st Bombardment Squadrons. The recognizable tail code of the 457th was the “triangle U” painted on the vertical stabilizers of the Boeing B-17 Flying Fortresses which operated from the air base. The 457th Bomb Group operated RAF Glatton from January 1944 until 20 April 1945, when it completed its 237th and last combat mission at the conclusion of the war.

Before June 1944, the 457th operated on attacking stategic targets in Germany – munitions factories, ball-bearing plants, marshalling yards and oil refineries. On D-Day, the 457th flew missions against Cherbourg Peninsula, attacking German positions off the east flank of American forces landing at Utah and Omaha beaches. By July 1944, the 457th had resumed strategic bombing and would continue to focus on German targets through April 1945.  However, the 457th provided aerial bombing support to the breakout from St. Lo in northern France, the British 1st Airborne’s landings at Arnhem in the Netherlands, and in support of embattled U.S. Army forces in the Battle of the Bulge.

At the conclusion of the War, the B-17s of the 457th Bomb Group returned to the United States and the airfield was used by No. 3 Group of the RAF Bomber Command flying B-24 Liberators and Avro Lancaster heavy bombers. By 1948, it was decided that the airfield was surplus and the land was returned to agricultural use and demilitarized. 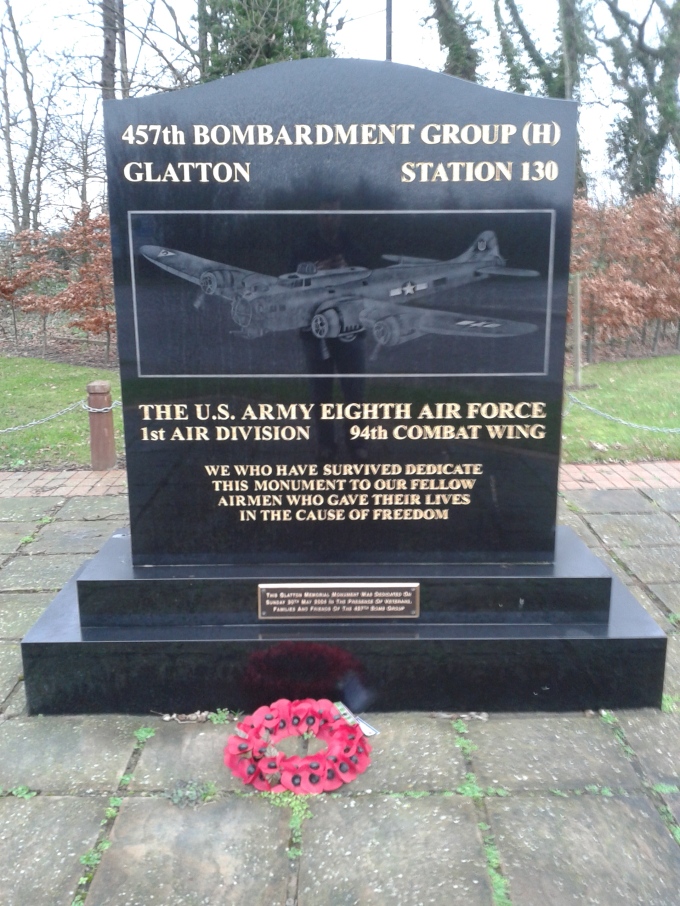 The 457th Bomb Group (H) Memorial, dedicated to the men who flew from RAF Glatton during the Second World War. © cambridgemilitaryhistory.com, 2014 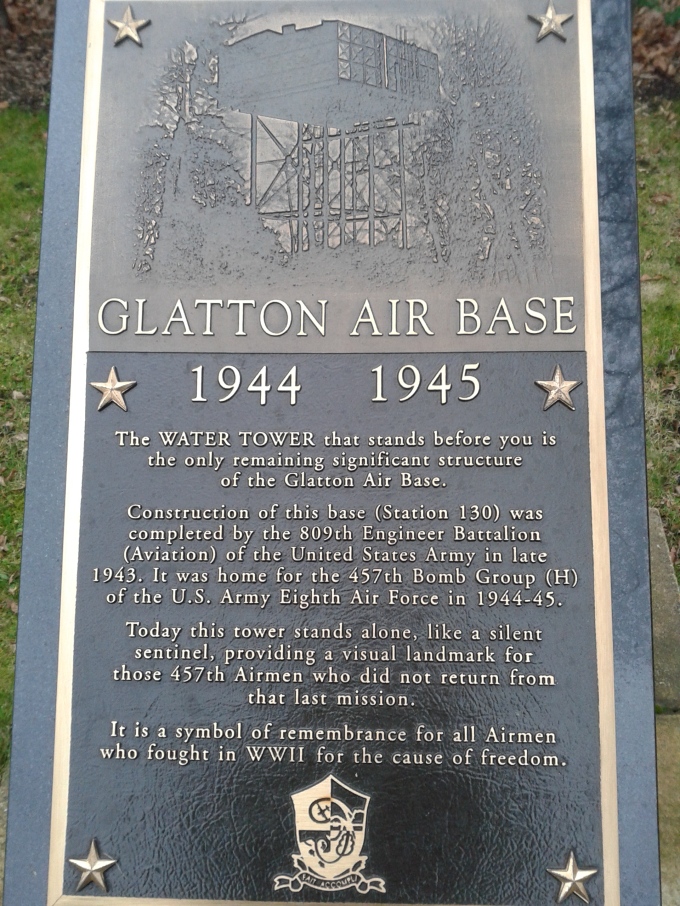 A marker placed at the foot of the watertower, which is a moving remembrance to the men who paid the ultimate sacrifice flying from RAF Glatton in the Second World War. © cambridgemilitaryhistory.com, 2015. 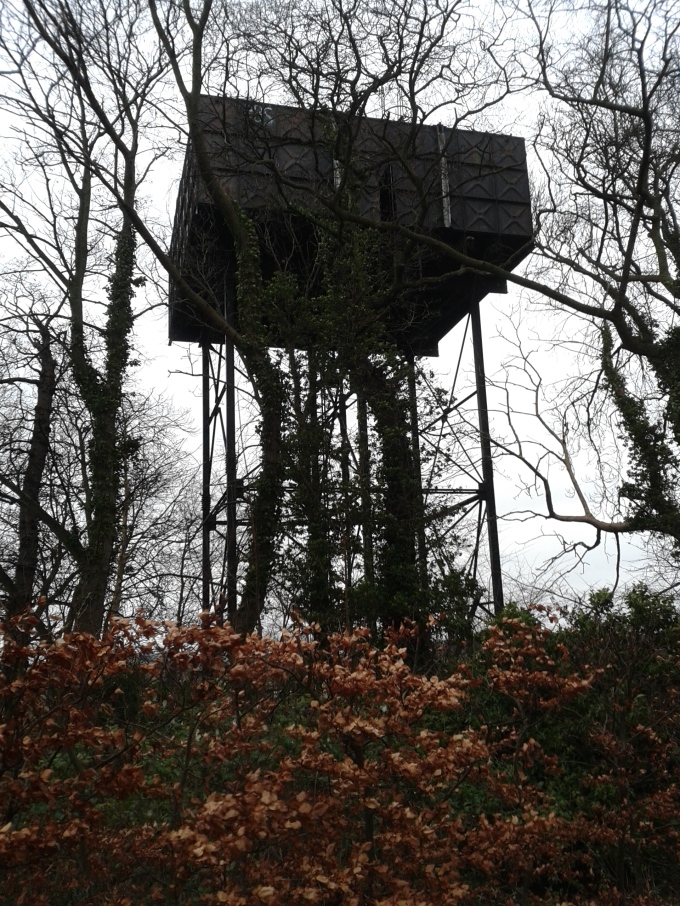 The watertower of the former airfield of RAF Glatton, the only surviving structure from the Second World War. © cambridgemilitaryhistory.com, 2015

Today, one of the Class A runways remains in use as the “Peterborough Business Airport” which is a general aviation facility.  It is a testament to the strength of the runways built over 70 years ago that the field remains in limited and lighter use.  The only other structure from the Second World War is the watertower which stands near the 457th Bomb Group Memorial, off Great Ermine Street, near the village. In All Saints’ Church, Conington, is a memorial to the 457th Bomb Group which must be visited. 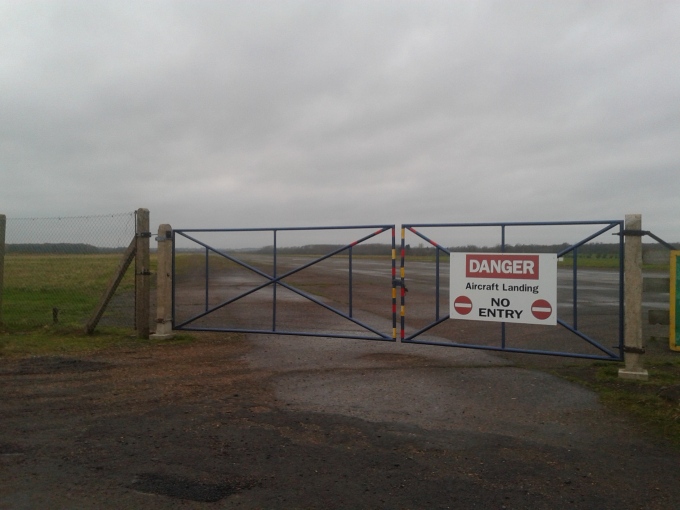 At the end of the Peterborough Business Airport’s runway, still in use from the Second World War as a general aviation facility. A marker placed at the foot of the watertower, which is a moving remembrance to the men who paid the ultimate sacrifice flying from RAF Glatton in the Second World War. © cambridgemilitaryhistory.com, 2015.

To see RAF Glatton, travel up the A1(M) and exit at the B660, signposted to Conington.